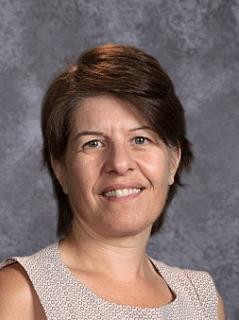 My name is Ms. Ana Taracido and I am a Spanish teacher at Travis High School. I have been working as a high school teacher in the USA since 2001, first in Boston and then in Texas.  I teach three different levels at Travis HS: Spanish 2, Spanish 4AP, and Spanish 5AP. I am originally from Spain. I was born in a beautiful historical city named Santiago de Compostela in the northwestern section of Spain right on top of Portugal, where we speak a language called Galician, very similar to Portuguese. I gained my University degree in History with a specialization in Archaeology at the University of Santiago and then gained a Master's in Education. After college, I left Spain and settled in a small town near London (UK). It was such a wonderful and rewarding experience that I went back to Spain to become part of a teacher exchange program through which the Spanish Department of Education sends teachers from Spain to work in the USA and Canada, and the USA government sends teachers from all over the country to Spain to take summer courses at the renowned Salamanca University. I have taught all levels of Spanish, but mostly Spanish 2 and AP Spanish Language and Literature.