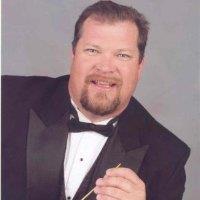 Hello, I am honored to be a part of the remarkable faculty here at George Bush High School and serve as The Director of Bands/Head Band Director and Fine Arts Department Head.

Dr. Wilkerson is starting in his twenty-fourth year as a music educator.

He is a native of North Central Florida. Dr. Wilkerson has received diplomas from Union County High School, Florida, a Bachelor’s Degree in Music from Jacksonville University, Florida, a Master of Education in Administration/Supervision and Leadership from the University of Phoenix, Arizona, and his Doctoral Education Degree in Educational Leadership, and just completed his Doctor of Music Education degree from Liberty University, Virginia.

In December of 2015, he was honored to serve as a presenter at the Midwest International Band and Orchestra Clinic in Chicago, Illinois. The clinic session was on “Using Your Available Resources to Thrive and Survive.”

Before arriving at George Bush High School, he has served in school districts in Arkansas, Florida, and Texas.

Over the last two decades, his bands have earned Superior and Excellent ratings at the district, state, and national levels. His band programs have won numerous State Titles and Bowl Game National Championships.