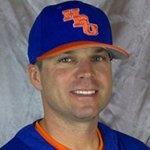 Coach Schmidt is in his 4th year at Elkins as head baseball coach and SPED teacher. He comes to Elkins after spending 6 seasons as assistant baseball coach at Houston Baptist University, and 1 season at Texas A&M University-Kingsville. Prior to collegiate ranks, he made coaching stops at Westbury High School, Brazosport High School, and St. Mary's Hall.

2022 was another playoff season for the Knights achieving the Bi-District playoffs after a 19-9-1 record and a 3 way tie for 2nd place in District 20-6A. The post season honors were plentiful as 8 Knights received All-District picks, and 3 THSCA Academic All-State selections. Sophomore Braylon Payne received THSCA All-State honors and was selected for the GHBCA All-Star Futures game. 3 Knights furthered their baseball careers at the college level.

2021 saw the Knights return to a full season of action after the Covid-19 pandemic. Despite the interruption, the Knights continued their winning ways by securing yet another playoff appearance with a 15-12 record. 4 Knights received All-District selections, and 4 also garnered THSCA Academic All-State honors.

In 2020 during Schmidt's 1st year at the helm of "The Castle", the Knights stormed out to a 7-2-1 record before the Covid-19 global pandemic-shortened season ended. The 2020 Knights excelled in the classroom as well as on the field, with the senior Knights placing 6 student/athletes on the THSCA Academic All-State Team.

In 2018 at HBU, the Huskies finish a program highest tie for 3rd place in SLC play, with their 2nd straight semi-final appearance in the SLC Tournament. They led the SLC with homeruns (61) and had the SLC Hitter of The Year. The Huskies produced a 35th round draft pick of the Texas Rangers and Rawlings Gold Glove winner at SS in Tyler Depreta-Johnson.

The 2017 Huskies landed a fourth-place finish in SLC play, and a semi-final appearance in the SLC Tournament, along with a 19th Round Pick of the Philadelphia Phillies in pitcher Addison Russ.

Schmidt helped the Huskies with their inaugural campaign into the Southland Conference in 2014, as HBU led the conference in team batting average (.292), received votes in the NCBWA Top 30, reached the highest RPI (77) in program history, and saw postseason honors with the SLC Utility Player of the Year.

Prior to HBU, Schmidt served as an assistant at Texas A&M University-Kingsville, where he helped the Javelinas to a school record 42 wins in 2013 - good for a No. 1 ranking in the South Central Region - hosted the NCAA Regional Tournament, regional finals appearance, as well as an LSC Tournament championship. The Javelinas spent 10 weeks ranked in the Top 25 in the country, with the highest ranking at No. 10.  He coached the all-Americans, a Regional Player and Pitcher of the Year, six all-region picks, seven LSC All-Conference picks, including Player and Pitcher of the Year.

Schmidt also has extensive experience in collegiate summer leagues. As 2015 coach of the Houston Clippers of the Karl Young League, the team claimed the 2015 regular season title. As 2013 manager of the Waccamaw Waves of the Beach Collegiate Baseball League in Myrtle Beach, SC, he led the inaugural campaign of the team to a second-place finish in Atlantic Division play, a playoff appearance, and five BCBL All-Star selections. As an assistant with the Laramie Colts of the Mountain Collegiate Baseball League in 2012, the team led the MCBL in stolen bases with 146.

A Minnesota native, Schmidt played collegiately at Winona State University, where he helped the Warriors to two NSIC Conference Championships, one NSIC Tournament Championship, and an NCAA Regional appearance. He earned a Bachelor’s degree in education from Winona State in 2003, and received his Master’s degree in sports management from the University of Houston in 2012. Schmidt is a member of the American Baseball Coaches Association. 28 of his former players have gone on to play professionally.